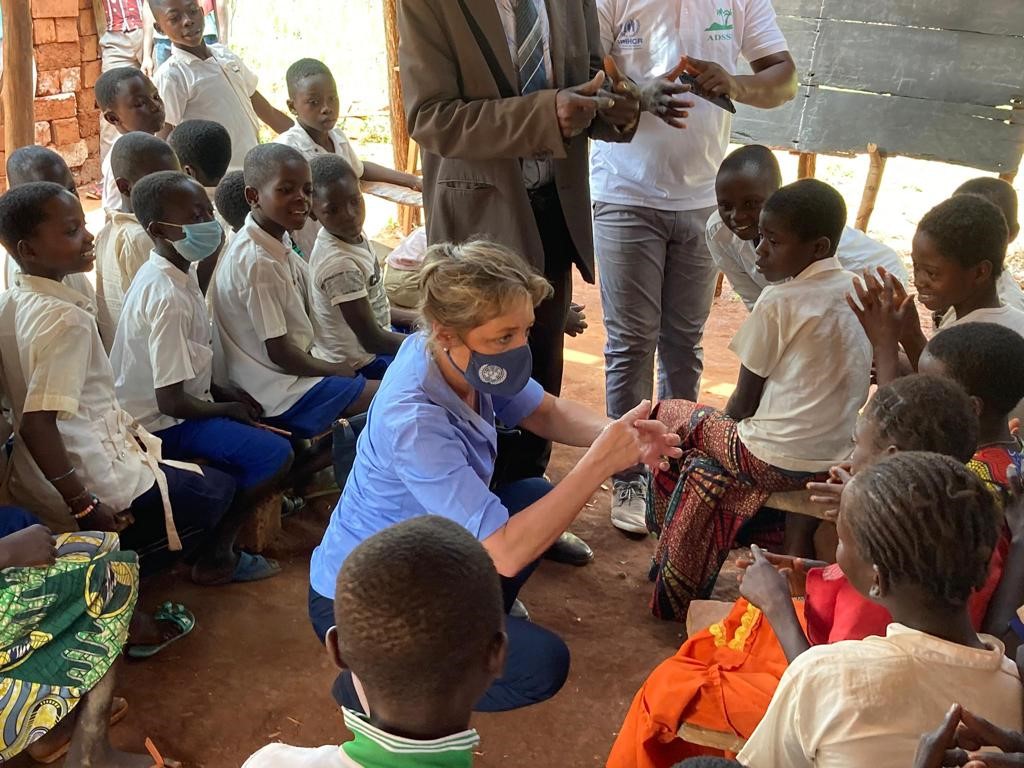 Education Cannot Wait (ECW) Executive Director Yasmine Sherif pictured here during a visit to a refugee site in the village of Modale, Democratic Republic of the Congo (DRC). Sherif says that with mental health and psychosocial support, along with several other components, children in crisis situations can be empowered to make it through the difficult situations they face and reach their potential. Courtesy: Education Cannot Wait

UNITED NATIONS, May 22 2021 (IPS) – Education Cannot Wait (ECW), the global fund that brings teaching and learning to children in emergencies and protracted crises, is observing five years of reaching boys and girls in some of the world’s hardest-hit conflict and disaster zones.

The initiative, launched in 2016, sought to close a major gap in humanitarian funding for education. At that time, less than two percent of humanitarian aid was allocated for education, although according to the United Nations Children’s Fund (UNICEF), 75 million children in crisis and war-torn areas were in “desperate need of education support”.

ECW stepped in as a lifeline for millions of school-aged children at risk of missing out on schooling.

Five years later, with health emergencies like the COVID-19 pandemic adding to issues such as war, protracted conflicts, displacement and disasters, this lifeline is more important than ever.

As the fund turns five, IPS speaks with ECW’s Executive Director Yasmine Sherif on its landmark achievements, efforts to scale up educational support during the pandemic and her vision for the next five years – amid rising hunger and conflicts. Excerpts of the interview follow:

Inter Press Service (IPS): As you reflect on the fifth anniversary of ECW, what do you think are some of the programme’s most important achievements?

Yasmine Sherif (YS): That we actually reached those children and youth left furthest behind in some of the most complex crises on the globe and were able to invest in their quality education. We speak of the girls in the countryside of Afghanistan – a country where girls now amount to 60 percent in our multi-year resilience joint programme. We were among the very first responders to the Rohingya refugee influx in 2017 and were able to quickly provide them with educational services and psycho-social support. We made a huge leap forward in our investments in Central Sahel and across sub-Saharan Africa, where children and adolescents are constantly being forcibly displaced and their need for a holistic and whole-of-child education is a top priority. And, we were able to reach active conflict zones and sieges in Syria, in Gaza in Palestine, and in Yemen, to deliver to those who would otherwise be considered “unreachable.” ECW now has investments in 38 countries.

These results, the difference we make in the lives of crisis-affected girls and boys, is our most important achievement. And here I would like to stress that this would not have been possible unless we had over 20 strategic donor partners, governments, foundations and the private sector, who steadfastly provided both strategic and growing financial contributions. In the same vein, without our close relationship with host governments, [local] communities, civil society and the UN agencies, we could not have become such an action-oriented global fund. They are doing the real work on the ground. Thanks to ECW working with the long-established UN coordination mechanisms on both the humanitarian and development side, we were able to rapidly grow and move with unprecedented speed. 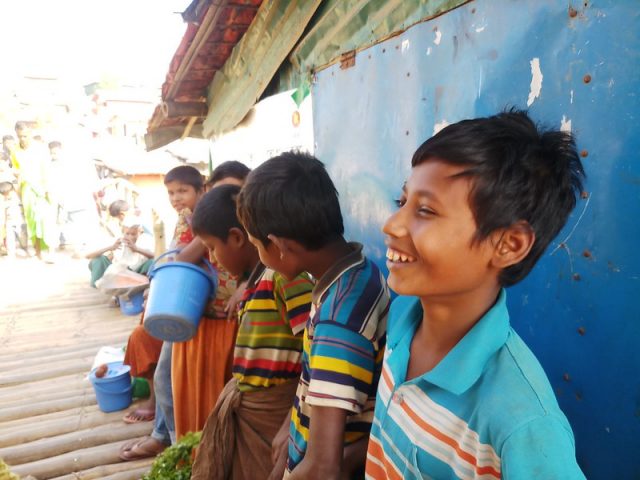 Education Cannot Wait (ECW) was among the very first responders to the Rohingya refugee influx in 2017 and able to quickly provide them with educational services and psycho-social support. Pictured here is Mohammad Rafique, along with other refugee children, gathered at the Rohingya market of Kutupalong camp. The photo was taken last March just two weeks before Bangladesh went into a nationwide lockdown in an attempt to contain the spread of the coronavirus. Credit: Rafiqul Islam/IPS

IPS: What are some of the main challenges that ECW is facing as it strives to educate children in emergencies?

YS: Access is always a challenge in countries affected by crisis, especially armed conflict. In countries like the Central African Republic or Yemen, you have different factions and different control over different territories. In such situations of emergency, you need to apply humanitarian principles to their utmost. We are there, supporting our colleagues in-country to focus on the children and youth and their right to an inclusive quality education. They are our priority. Lack of infrastructure and digital access is also a challenge in sub-Saharan Africa, for instance.

However, the overarching and biggest challenge is financing. If all of ECW’s multi-year resilience programmes – which are joint programming between humanitarian and development actors – across Africa, Asia, the Middle East and South America, were fully financed, we could reach 16 million girls and boys with an inclusive quality education, rather than the current five million. More funding means more children and youth, more girls, more children with disabilities, more refugee children, are finally accessing their right to Sustainable Development Goal (SDG) 4: quality education – and, with that, additional development goals, such as rising from extreme poverty, being empowered by gender-equality, and through education, [they are] ready to bring peace and justice to their societies.

IPS: ECW announced this month that through a $300,000 Acceleration Grant, psychosocial support would be extended to children in emergencies, alongside education. How important is mental health support to these boys and girls?

YS: Mental health and psychosocial support is a top priority. Most children and adolescents, if not all, are traumatised by protracted armed conflicts, forced displacement and climate-induced disasters. Imagine what they have gone through and are forced to keep going through. As a child or a young person, you see your family members killed, your home destroyed, militia roaming around, trafficking, bombs and rockets, forced recruitment and fleeing in haste across the border to another country. What does that do to a young person’s mind? It traumatises them and severely impacts on their ability to feel safe and learn in a safe environment. Unless we address their traumatic experiences, provide them with mental health and psychosocial support, very little learning can take place.

Trauma and chronic stress can either break them or make them. With mental health and psychosocial support, along with several other components, such as social and emotional learning, academic learning, sports, arts, school feeding, protection, safe learning environments, and empowered teachers – who also suffer, by the way – we can empower them to make it through the difficult situations they face and reach their potential. Without this support, their direction in life will most likely go the other way and break them, leading them to only survive rather than thrive.

IPS: According to UNICEF, refugees are five times more likely to be out of school than other children, with girls facing unique risks. Tell me a bit about ECW’s focus on gender equity in education in emergency settings.

YS: Refugees and internally displaced make up 50 percent of ECW’s investments. We follow populations, those left furthest behind. That is our starting point and added value. Among them, girls in secondary school are amongst those most left furthest behind. At the Refugee Forum in 2019, we committed together with the World Bank and the Global Partnership for Education to jointly advance refugee education, especially refugee girls. In ECW, we have taken affirmative action and set the target of 60 percent of girls and adolescent girls in all ECW’s investments. But it is not just about numbers or percentages. We also focus on protection measures for girls and adolescent girls, training of teachers and sanitation facilities.

We also need to work with teachers, men and boys to advance girls’ education, to sensitise them to girls’ right to safety, respect and encouragement to succeed academically. I meet so many inspiring adolescent girls in my travels to our investments in various countries, who, once they complete their education, will become powerful leaders in their communities and countries. To see them speak up fiercely for their right to an education and finally be able to exercise it is very rewarding and brings hope. They are the ones we have been waiting for, to paraphrase Alice Walker.

IPS: As you look ahead to the next year or next five years, what is your vision for ECW and for the boys and girls you support?

YS: Coming back to results and making a real difference, the vision is to reach at least 2/3 of the children and youth – of whom 50 percent are girls – in the most crisis-affected parts of the globe and secure for them an inclusive, continued quality education. But this will require making education in emergencies and protracted crisis a top priority for financing by governments, the private sector and philanthropists. Without the finances, we cannot reach these girls and boys. Yet, with financing, all is possible.

In the coming five years, ECW, which is already a one-billion-dollar fund (counting trust fund and in-country contributions combined), will need billions more to change the world. That is the key for this vision: deserving and urgently needing billions in investments. If we want to close the gap on the SDGs, we need to start by investing in quality education (SDG 4) for those left furthest behind. Through such investments, we are also investing in multiple other Sustainable Development Goals. Without it, none of the other SDG’s can be attained. It is logically impossible.

More broadly, I see the experiment or innovation of the Education Cannot Wait Fund, which was conceived and pursued by the UN Special Envoy for Global Education,  Gordon Brown, who serves as Chair of ECW’s High-Level Steering Group, together with governments, like the United Kingdom, Canada, the United States, UN agencies, civil society and foundations, … setting the example.

This was a vision of impatience to reach those left furthest behind, a vision of less bureaucracy and more accountability, and a vision of breaking silos and of finally working together and, in doing so, place education at the forefront of international financing.  We are moving in this direction and in five years, I hope the larger part of those who care for the world will have joined ECW in the quest that every child, every girl, every boy, every youth, who today suffers in wars, forced displacement and in sudden climate-induced disasters, will see the light of an inclusive and whole-of-child driven education. That is how we change the world and make it a better, more peaceful, stable and just place for the human family. This vision is priceless.