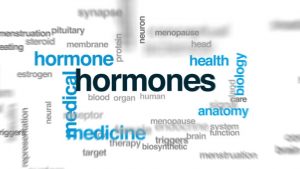 Hormones are chemicals made by your body’s endocrine glands. Once released into your system, hormones function as messengers that send messages into other parts of your body. This function is what earns them the name ‘chemical messenger.’

This communication is two-pronged.

The first is takes place between two endocrine glands. Here, one gland releases a hormone, stimulating another gland to alter the hormone level it’s releasing into the body. The second is between an endocrine gland and a targeted organ.

The most common hormones include Dopamine, Human growth hormone, Cortisol, Progesterone, and Testosterone. This article will detail the functions of these hormones in the body and some interesting facts about each.

1. Dopamine
Dopamine is involved in reward, attention, regulating body movements, and memory.
In large amounts, dopamine creates feelings of reward and pleasure. These feelings can make you want to repeat the behaviors that trigger them. The following are some interesting facts about dopamine:

• It helps with alertness. Sleep-deprived people tend to have lower levels of these hormones.
• Insufficient dopamine can cause uncoordinated movements, while too much can cause tics and other small uncontrolled movements.
• Foods with L- Phenylalanine and L-tyrosine increases dopamine levels because they convert into dopamine when consumed. Sugary foods have the same effect as well, though the dopamine spike is short-lived.
• Massage can help increase your dopamine levels.
• Dopamine increases sex drive. Too much, however, can lead to sex addictions and fetishes.

• It helps minimize cognitive decline.
• Increases bone formation protecting you against osteoporosis.
• Growth hormone supports muscle growth and strength, which is why it’s much sought after by fitness buff.
• Supports cardiovascular health by reducing cholesterol, decreasing adipose tissue, and lowering blood pressure.
• Strengthens the immune systems, helping your body prevent and fight off infections and disease.

The body produces higher levels of the Human Growth Hormone when you are younger to help you grow. The levels produced then gradually decline as you age. Hormone replacement can be useful in HGH levels restoration but there are some warnings and side effects.

3. Cortisol
This is a steroid hormone produced from cholesterol. Cortisol is known to be the body’s primary stress hormone and works with specific parts of your brain to control mood, fear, and motivation. Read below some interesting facts about cortisol:

• It’s released directly into the blood.
• Cortisol receptors are found in just about every cell in the body.
• Cortisol plays a part in weight management as it plays a significant role in glucose metabolism.
• It affects your immunity. Cortisol slows some body functions to help power your body when stressed. Your immunity is one of the affected functions.
• Cortisol is linked to both memory trouble and, ironically, memory formation.
While cortisol is best known as the fight or flight hormone, it’s responsible for far more than this.

The main common ones are regulating your sleep cycle, increases blood sugar, regulates blood pressure, and keeps inflammation down. Cortisol also controls how the body uses proteins, fats, and carbohydrates.

4. Progesterone
This is a female sex hormone produced in the ovaries around the same time ovulation happens. While the hormone helps to regulate your menstrual cycle, its main role is to support pregnancy. After ovulation, progesterone helps thicken the lining of the uterus in readiness for a fertilized egg. If no egg is fertilized, the lining breaks down and is expelled from the body. This is marked by menstruation.

After childbirth, the same hormone supports breastfeeding. The following are some things to note about this hormone:

• Both men and women have progesterone receptors in different parts of their bodies.
• The hormone supports a healthy heart, liver, bones, and brain tissue in either gender.
• Progesterone is important to the prostate.
• It stimulates feel-good transmitters in the brain.
• Progesterone is a precursor to other hormones like cortisol, testosterone, and estrogen.

While often thought of as an exclusively female hormone, men produce little amounts of the hormones to aid in sperm development.

5. Testosterone
Like progesterone, testosterone is found in both men and women. While females have it in very little amounts, it’s the critical male hormone.

Aside from fertility, testosterone regulates fat distribution, red blood cell production, and muscle mass. The hormone’s production increases significantly during puberty and begins to decline at around 30 years of age.

• Prohormone supplements do not affect testosterone levels.
• This is the hormone primarily responsible for male sex drive.
• It helps males develop and maintain facial and body hair.
• Low testosterone levels can affect emotions. Men with low levels can feel unmotivated or less confident in themselves. It is also known to cause depression, memory problems, and the inability to focus.
• In females, small traces of testosterone are produced in the ovaries. If the levels are too high, women can experience acne, infertility, and irregular periods.
In the uterus, the genetic male, with the Y chromosome, starts to produce testosterone at around the 7th week.

What Is Nape Shoulder Pain And How Is It Cure?
How to Remove Junk from Your House
Comment